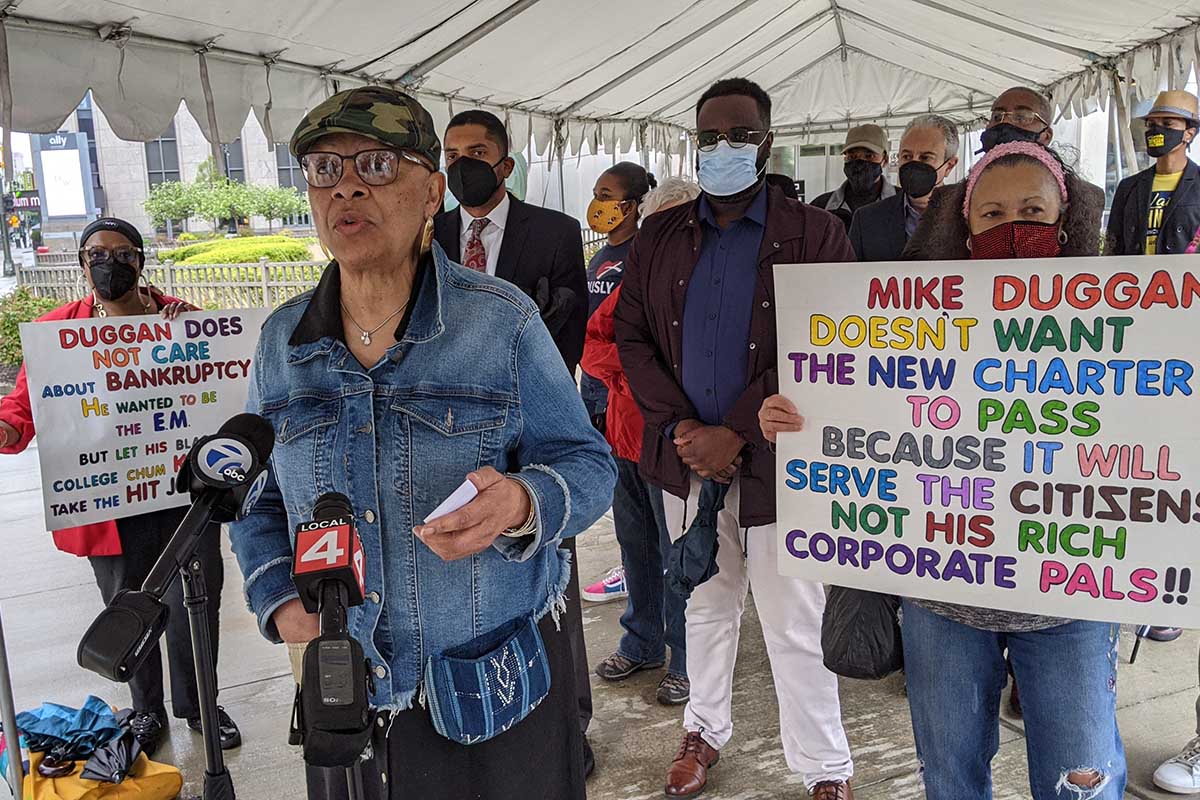 The City Charter is the guide for how the city government ought to function. Nicole Small, the vice chairwoman of the Charter Revision Commission, has called the charter the “constitution of the City of Detroit.”

“It’s the document that details how Detroiters want their city to be run,” Small told BridgeDetroit in February.

The revised charter, which will be on the Aug. 3 ballot, has a slate of proposed updates to city government that include implementation of a water affordability program, a low-income fare for people who use public transit, affordable housing provisions and disallowing the service of police officers on the Board of Police Commissioners.

The City Charter was last updated in 2012, and charter commissioners have been meeting with residents, grassroots organizations, and City officials since 2018 to create a charter that they say best serves the people of Detroit.

The charter commissioners held a press conference Wednesday, along with grassroots organizers and city residents, criticizing the mayor’s administration for not allocating enough money for the commission to educate residents on the proposed changes.

The mayor’s office recommended using $30,000 to print copies of the charter, translate it for non-English speakers, and to disseminate it to residents. Barbara Wynder, the treasurer of the Charter Revision Commission, says there isn’t enough money to help residents understand the proposed changes to the charter.

“You don’t let people know and they won’t be present when the time comes to say ‘yea or nay.’ We aren’t here to suggest how the people should vote. We are here to suggest that people have a right to the information,” Wynder said.

Small said the commission needs $367,000 for its campaign, including funds for a community engagement director, printing, postage, advertising and poll workers.

Conrad Mallett, the deputy mayor for the City of Detroit, says the mayor has not proposed reducing the Charter Commission’s current fiscal budget of $300,000 and the question of additional funding is before council.

“If the supplemental appropriation is adopted, in addition to the support of the Detroit city website and cable TV channels, the Charter Commission will have $279,000 for the three months leading to the August election,” said Mallett.

Mallett said the Charter Commission wants additional funds to run a “political campaign to persuade the public to vote for the proposed charter.”

“It is not the responsibility of the Detroit city government to fund a political campaign for or against the charter’s adoption,” Mallett said.

“I can’t speak to the intentions of my colleagues or the (mayor’s) administration, but I can say I voted to fund the Charter Commission at the level they requested because I respect the fact they are duly elected by the residents with a charter-mandated job to perform,” Sheffield said.

“I believe it can be construed as undermining the will of the voters who elected the charter commissioners,” she said.

“That’s what democracy is about, and the mayor’s office knows this. We are doing exactly what previous commissions have been funded to do and have done,” McCampbell said.

McCampbell says it is “reprehensible” for the mayor and City Council to not properly fund education efforts for the charter.

“It’s denying folks their right to know what’s in the charter and to make an informed decision,” he said.

McCampbell also said he found it difficult to work with the mayor and City Council on proposed charter revisions.

“We reached out to the mayor and his administration numerous times throughout the process to get them to engage on the charter, to get proposals from them, and for them to be a part of the process,” McCampbell said.

McCampbell said the mayor’s administration mostly weighed in on costs and that the Charter Commission responded by amending some of the proposed changes. The City’s Office of the Chief Financial Officer said earlier this year that the City cannot afford to pay for some costs associated with implementing the charter revision. The Office of the CFO recently said it would cost $2 billion to implement the proposed revisions.