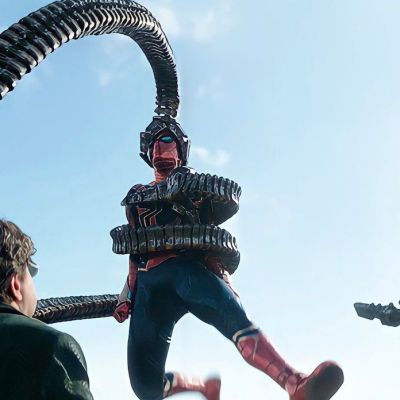 It’s the trailer that broke the internet. The first Spider-Man: No Way Home sizzle footage, which ended with the familiar sight of Alfred Molina strapped to four mechanical arms, was viewed more than 355 million times in its first 24 hours on the web, setting a Guinness world record. When Molina’s iconic Doctor Octopus (or Doc Ock) smiled, “Hello, Peter,” the whole world smiled right back.

Despite it being nearly 20 years since Molina last played Doc Ock in a movie—way back when Tobey Maguire was still Spider-Man and George W. Bush was only in his first term as President of the United States—the excitement audiences had at seeing the not-so-good doctor up to no damn good was palpable. Part of this, of course, is due to the fan theory that if Molina is coming back, then Maguire probably will too (although that isn’t confirmed). But even without Maguire, there’s something just remarkable about seeing Molina as Ock again. After all, he remains the greatest Spider-Man movie villain to this day.

It’d be easy to dismiss such a thought as mere nostalgia, rose-tinted memories of long gone times. Yet if that’s the case, Sony and Marvel Studios are keenly aware that most folks share that wistfulness about the Spider-Man 2 heavy since the new trailer greeted his return with all the reverence of Harrison Ford showing up again as Han Solo at the end of the first The Force Awakens trailer, or seeing a proton pack fire again at the end of Sony’s own Ghostbusters: Afterlife trailer. Clearly, Marvel is banking on most folks being thrilled to see Spidey’s greatest cinematic foe returned to their universe, despite Marvel themselves already taking a stab at multiple classic Spidey villains to date, including Vulture, Mysterio, and the Shocker.

No matter the continuity, or “Spider-Verse,” or even in our modern blockbuster era where Sony is giving Venom and every other Spider-Man villain their own spinoff movie…. there’s still just something about dear old Otto.

It certainly wasn’t planned that way. When Alfred Molina was cast as Otto Octavius two decades ago, he was following in the emerging Sony and Sam Raimi pattern of casting respected character actors who just received awards attention a year or two ago as the next big bad. In 2001 that meant casting Willem Dafoe—who was about to have a career renaissance after receiving his second Oscar nomination for Shadow of the Vampire (2000)—and a few years later, it was Molina’s turn fresh off the Oscar winning Frida (2002). Even so, it’s arguable that the studio which also wanted the Lizard and Black Cat in the sequel—and which would soon get its wish to overstuff a Spidey follow-up a few years later—never fully realized just how special having Doctor Octopus could be.

Director Raimi and the final screenwriter, Alvin Sargent, certainly did though. Jettisoning the other extraneous villains, as well as an awful studio note about having Doc Ock crush on college co-ed Mary Jane Watson, they returned Otto to some semblance of his comic book roots. And, just as importantly for Raimi, they took full advantage of what might be Spidey’s most visually dynamic villain.

Often drawn to be a pudgy and middle-aged introvert who hides behind sunglasses and a bowl cut, Otto Octavius has never been a “cool” looking character in the traditional sense. It’s why on the page, many young fans might gravitate toward the oily nightmare of Venom, or the demonic menace of Spidey’s technical arch-nemesis, the Green Goblin. But whereas both of those characters present a greater hurdle to make tactile onscreen, Doctor Octopus’ mechanical arms create a visual symphony of spectacle and danger. Simply put, watching the balletic movements of an agile wallcrawler dodging a litany of moving arms just looks wildly fun, especially in motion.

Raimi got the memo in that regard, relying on extensive puppeteering for close-ups and CGI for wide shots to give alternating weight and fluidity to Doc Ock’s appearances. He also made Ock the first comic book movie villain to actually be able to participate in comic book action. Dafoe’s Green Goblin from a few years earlier, while a campy delight, was somewhat hindered by that film’s smaller budget and the still nascent development of digital effects in superhero action.

But in Spider-Man 2? Doc Ock and Spider-Man could battle vertically on the side of a building for one set-piece and on top of a moving elevated train in another. Digital effects were still early enough along that Raimi didn’t feel the need to shove as much muddled carnage onscreen as possible. He thus had the relative freedom to bask in his images, savoring the vertigo of Spidey and Ock eyeballing each other while looking 40 stories down, or in the horror of just one car (and an actual car, not a CGI blob) being thrown through a window as opposed to a fleet of them. Sometimes less is more.

Yet it was more than just the visual splendor of Ock that made him a great villain. The Spider-Man movies, and superhero films in general, are littered with visually cool big bads who rely on massive amounts of computer generated effects, all of which are used to paper over how thin and disengaging they really are. Which again, brings us back to how intelligently Molina and Raimi presented this character.

Doctor Octopus is not what one would consider a “grounded” villain. There’s unlikely to be any Martin Scorsese-emulated origin stories made about his sad childhood. He’s a megalomaniacal fiend who despite building four mechanical sci-fi arms—and which are also revealed to have artificial intelligence and are resistant to magnetism and intense heat in Spider-Man 2—is still inexplicably searching for a creation that will justify his genius and get him worldwide acclaim.

Yet Molina and Raimi sharply underplay all that jazz, teasing out great depths beneath waters Molina keeps conspicuously still. This was a counterintuitive move after the first Spider-Man. Dafoe is, again, a delicious joy of scenery-chewing as the Green Goblin. But while playing Spider-Man’s greatest comic book villain, Dafoe was saddled with a ridiculous costume and ludicrous motivations, both of which were in-keeping with most comic book movie villains not played by Ian McKellen during the previous 25 years.

Molina, by contrast, played Doctor Octopus completely straight and also with undaunted conviction. The movie would poke some fun at the character’s absurdities, at times, with J.K. Simmons’ J. Jonah Jameson snarking the obvious: “A guy named Otto Octavius winds up with eight limbs. What are the odds?” Nevertheless, no character dares laugh or crack wise in Doc Ock’s actual presence. Since the beginning of his career, Raimi has been a cheeky director, turning his gorefest debut, The Evil Dead, into a dark comedy. But he knows when to dial back and he always films Octavius with an operatic sense of pathos and grandeur.

Molina comports himself similarly onscreen. When we first meet him, his Octavius is slightly more dynamic than the megalomaniac on the comic book page. He has a wife Rosalie (Donna Murphy), and a life that existed before he became a supervillain. He and Rosie share sweet memories of studying poetry in college with Peter, and both display a genuine interest in another character’s personal life—an element which has gone largely by the wayside in the superhero movie genre, before and sense.

It’s not exactly Ibsen, but it’s enough to give the accident which welds the mechanical arms to his spine and drives him insane some emotional weight. And it gives Molina enough to chew on to make the character both tragic and, eventually, menacing as he gives in to his madness.

In the 17 years since Spider-Man 2 was released, supervillains have tended to be increasingly written as glib and self-aware as the heroes, particularly when appearing in the Marvel Studios canon. There has been a clear calculation made that these movies go down easier if the films frequently make winking asides to the audience not to take it too seriously, not to engage too critically, and just generally not to worry about it. There are exceptions of course, but ever since Loki was turned into the Hulk’s yo-yo in The Avengers, this has been closer to the rule than the exception, even for straight-faced villains like Ronan the Accuser in Guardians of the Galaxy, whose self-seriousness makes him a figure prime for ridicule when he’s baffled by the concept of a “dance off.”

In Jon Watts’ Spider-Man films there have been attempts to get away from this, with Michael Keaton’s Vulture coming the closest to replicating the generational tension created by Doc Ock. Once again we had a father figure doing battle with “the kid” who won’t accept his authority. Nonetheless, the Vulture’s beef persistently being left with Iron Man, and not Spider-Man, never let that rivalry fully blossom. Jake Gyllenhaal’s Mysterio, meanwhile, returned to the typical self-referential glibness of traditional Marvel Studios villainy, with Mysterio being more concerned with how his cape is ironed before he meets the Queen of England than he is with the fight at hand against Spidey.

There is no tension-deflating bathos humor to Doc Ock’s scenes in Spider-Man 2. When Ock’s arms first awaken from their AI slumber and slaughter a room full of surgeons, it’s nightmarish, with Raimi repeating many of the horror movie tricks he learned in the Evil Dead films. When Otto awakens and finds the dead bodies, he doesn’t make a lighthearted joke which trivializes the sequence. He lives with it.

Molina plays all his scenes with this level of conviction, which is why there has never been a better onscreen dynamic between Spidey and one of his villains. Peter Parker, even Tobey Maguire’s more earnest interpretation of the character, is just a kid often in over his head who compensates with a smart mouth. Ock is a curt professional who doesn’t have time or interest in engaging with such juvenilia. Their odd couple energy makes the potential violence increasingly bitter as the movie goes along.

Take for instance the bank scene. The dialogue between the two characters is almost perfunctory, and could be found as quickly inserted filler on any CW show. Doc Ock says, “You’re getting on my nerves,” and the Web-Head retorts, “I have a knack for that.” But the cold, almost clinical way, Molina responds, “Not for long,” has such confidence it’s almost thrilling to watch his anger boil.

Molina also brings in his choices to moments where Ock is also having fun. The instinct to have him look back and forth, twice, between two passengers before picking which to toss first off a train is a clever character moment. And when the rest of the passengers on said train gather to stand up to Ock as “New Yorkers,” there is an almost infectious glee in Molina’s smile as he gets to hurt all of them in one brusque motion.

Moments like these are couched in action movie eye candy which still holds up not because of the dated CGI but due to Raimi’s intuitive understanding of film composition and using action to tell a story as opposed to just overwhelm the senses and clutter the frame. Molina likewise gives all his moments a regal sense of superiority that elevates his character and performance above even the dialogue. Like the mechanical arms attached to his spine, this is a perfect melding of director and star. And it’s created a villain who has us all at “hello.”