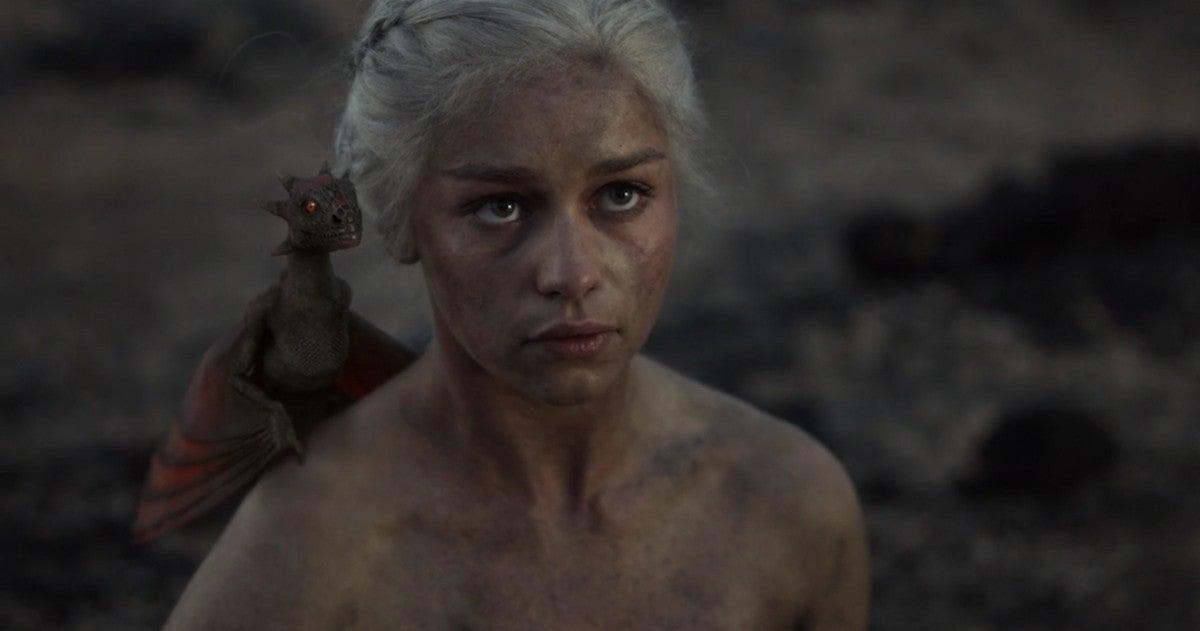 'Game of Thrones' Spinoffs: Every Project to Know About

HBO has been planning Game of Thrones spinoff series for years now, and one is premiering within months, others still have a long way to go. At the time of this writing, there may be as many as 6 spinoffs -- or, as author George R.R. Martin has called them, "successor series." Read on for a summary of what they are and what we know about each one so far.

Game of Thrones is based on Martin's series A Song of Ice and Fire, which is famously unfinished, though the work continues. In the meantime, Martin has established a sprawling fantasy map and a detailed timeline, providing the basis for many TV shows out of his work. He has also written a series of novellas called The Tales of Dunk & Egg, an encyclopedia-style book called The World of Ice and Fire to flesh out his setting, plus a fictional history book called Fire & Blood, which details the reign of House Targaryen over Westeros. This means that in spite of the infamous ongoing status of Martin's main series, there is more than enough material to be adapted and expanded into new TV shows.

We know that HBO is in it for the long haul because back in March, The Hollywood Reporter learned that the network had renewed its overall deal with Martin. That means the network is paying the author a sum in the "mid-eight figures" to get the first pick of any projects he may be pitching, especially adaptations of his prose. This announcement came on the heels of several rumors and reports about possible spin-offs in the works.

Martin himself says that he remains focused on finishing his novels in his frequent blog posts. He also stresses that TV deals do not always work out -- even for a franchise as big as this. Still, fans can't help but watch and hope that their favorite concept makes it all the way to the screen. Here is everything we know about all of the Game of Thrones "successor shows" currently in the works.

'House of the Dragon'

House of the Dragon is currently filming in the U.K., and is expected to premiere sometime in 2022. Its showrunner is writer Ryan Condal, and it has cast Paddy Considine as King Viserys Targaryen, Olivia Cooke as Alicent Hightower, Emma D'Arcy as Rhaenyra Targaryen and Matt Smith as Daemon Targaryen. Other cast members include Steve Toussaint, Eve Best, Rhys Ifans and Sonoya Mizuno.

House of the Dragon is based on Martin's latest book, Fire and Blood, which is a fictional history of the Targaryen dynasty in Westeros. The book covers about 120 years' worth of history in the Seven Kingdoms, but the show will be focused on a period about 180 years before the events of Game of Thrones. At this time, there is a civil war within House Targaryen called The Dance of the Dragons.

This subject makes perfect sense for HBO, as it will be even more action-heavy than the original series. The Dance of the Dragons pitted a dozen dragons and even more riders against each other in an all-out war. This series may serve as the lynchpin around which other, more experimental series can orbit.

The next most-developed project so far is a series about Corlys "The Sea Snake" Velaryon, tentatively titled 9 Voyages, according to a report by Deadline. The Sea Snake will be an old man in House of the Dragon, but Martin has documented his whole life in Fire and Blood and The World of Ice and Fire. He is an enigmatic figure who sailed all over the world in his life on his "nine great voyages."

This series is reportedly in development by writer Bruno Heller (The Mentalist, Rome and Gotham) and a small creative team, but few details are available so far. However, fans are hopeful that The Sea Snake's travels will allow Martin and the show's creators to further expand this fictional world beyond Westeros' shores, and perhaps make some revelations about the far-flung lands where legends like Azor Ahai come from.

10,000 Ships is the working title for a prequel going even further back in Westerosi history to the mass immigration of the Rhoynar to Dorne. In Martin's history, The Rhoyne is a massive river in the eastern continent of Essos, which was home to a powerful civilization called the Rhoynar. However, when Daenerys' ancestors the Valyrian Freehold began to encroach on their land, the Rhoynish Queen Nymeria ordered all of her people onto all 10,000 of her ships and led them on a mass exodus to look for a new home.

It is unclear when exactly this legendary migration happened, but we do know that the Doom of Valyria happened about 500 years before the events of Game of Thrones. Regardless, this series might shed light on the legends of Rhoynish water magic, and the mysterious Dornish culture in the southern desert of Westeros. So far, this series remains a rumor reported by Deadline, with no cast, writers or other creators besides Martin attached.

Aside from A Song of Ice and Fire itself, the best-known story set in Westeros is likely Martin's novella series The Tales of Dunk & Egg. These short, one-perspective books follow the humble hedge knight Ser Duncan the Tall and the disguised Targaryen teenager Aegon V -- who goes by "Egg" -- as they travel the country doing chivalrous deeds. These stories are set about 90 years before the events of Game of Thrones.

Martin has published three novellas in this series, which have been collected into one volume called A Knight of the Seven Kingdoms. Sources at HBO first told Variety that an adaptation of this series was in early development, though fans have their doubts. Mostly because in a 2017 blog post, Martin said that he wanted to write more Dunk & Egg novellas and that he did not want the series adapted until it was finished due to the controversy surrounding Game of Thrones.

Moreover, many fans expect the story of Dunk & Egg to connect to and seriously impact the events of A Song of Ice and Fire. That's because the novellas are leading towards a mystery that Martin is protective of -- the "Tragedy at Summerhall." They may also provide more details on the mysterious figure Bloodraven, who goes from a political player in King's Landing in Dunk & Egg to the half-dead Greenseer that teaches Bran Stark to use his powers beyond The Wall in the main series. If the Dunk & Egg adaption is really in the works, Martin has not confirmed it yet.

The Hollywood Reporter caught wind of an animated drama set in Westeros being developed specifically for HBO Max. This show has reportedly begun meetings with writers to develop it further, but so far no details about the plot or contents have been released.

When reporting on Martin's overall deal last week, THR speculated that the animated series could have an anthology style, since animation would allow the series to cover decades or even centuries' worth of Martin's fictional history in just a few episodes. Interestingly, writers Elio M. Garc?a and Linda Antonsson endorsed this idea. They co-wrote The World of Ice and Fire with Martin -- an encyclopedia-style book about the world of Westeros.

"We would certainly think a World of Ice and Fire animated series would be pretty neat as an anthology show!" they wrote on their fan site, Westeros.org.

In mid-July, The Hollywood Reporter broke the news that a new spinoff was in the works to explore one of the most exotic locations in Martin's fantasy world: The Golden Empire of Yi Ti. The nation is based on imperial China, and is on the opposite side of the map from Westeros where it remains mired in mystery. It was barely mentioned in the Game of Thrones TV show and rarely comes up in the books either, though the details in The World of Ice and Fire fascinate readers to no end.

Some fan theories speculate that Yi Ti is the original home of dragon-riders, like before Daenerys' ancestors formed the Valyrian Freehold. Whether or not a TV show would touch on those kinds of connections is uncertain. The sources at HBO also told THR that the Yi Ti show would likely be animated.

While those are all the Game of Thrones spin-offs in the works right now, fans may never get over the loss of the original slate of successors -- particularly Bloodmoon. The first spinoff ordered to pilot, Bloodmoon was meant to take place 10,000 years before the events of Game of Thrones in the "Age of Heroes." Many expected it to explain the origins of the White Walkers, the construction of The Wall and other, more nuanced parts of Martin's magical world.

Bloodmoon filmed an expensive pilot with showrunner Jane Goldman and star Naomi Watts. The fact that it wasn't ordered to series from there left many fans heartbroken, and some hold out hope that it could be picked back up to this day. So far, HBO has made no remarks indicating that it will be.

Meanwhile, a more recent rumor indicated that a drama was being developed called Flea Bottom. It would have been set in the slums of King's Landing at an unspecified time, fleshing out the city and the people who toil there.The Hollywood Reporter broke the news of this cancellation in July.

Game of Thrones is streaming now on HBO Max. House of the Dragon is filming now and is expected to premiere in 2022. As for the other ideas listed above, fans will just have to keep their fingers crossed.

'Game of Thrones' Spinoffs: Every Project to Know About