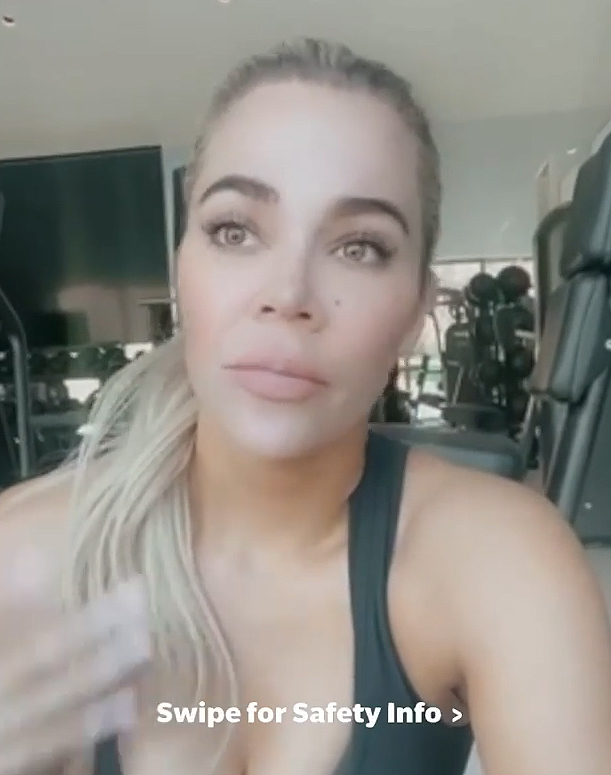 KRIS Jenner’s boyfriend Corey Gamble was slammed as “creepy” for telling Khloe Kardashian he “loves her.”

The backlash comes after the 41-year-old gave Khloe an “inappropriate” nickname.

In the video, Khloe told her fans that she loves exercising and no longer has to worry about missing her works outs due to the medication preventing her migraines.

Alongside the clip, the Keeping Up With the Kardashians alum wrote: “I love feeling strong and powerful!! So Im so grateful I have @nurtecodt as my workout partner! It can take away my migraine pain within an hour!! Getting me back to the gym and back to beast mode. Thank You @nurtecodt!!”

Shortly after Khloe uploaded the post, Corey took to the comments section to share his love with the reality star.

He wrote: “And I just love to Love you!”

Many fans were uncomfortable with the affectionate comment, as one person sarcastically responded: “That’s not creepy or anything.”

Most read in Celebrity

'BEST DAY OF MY LIFE'

Another person said he “sounds creepy,” while a third simply commented: “Ew.”

An additional person added: “How inappropriate for you to post that about your woman’s daughter weird a** creepy dude.”

Corey posted the comment after he was slammed for giving Khloe an “inappropriate” nickname.

Last month, Khloe shared several photos with Corey on Instagram to wish him a happy birthday.

“I hope you have the best day, year, life!!! You consistently have incredible energy and are always there for everyone.

“You’re always the life of the party. You can do the splits for goodness sakes! Cheers to you today and everyday!!!”

Corey replied with a love heart emoji and commented again to say: “Thx for the words bunny.”

Some of Khloe’s followers were surprised by his choice nickname for her, branding it “strange.”

One fan wrote: “Is this your sad attempt at humor?”

Another added: “You’re better than this.”

Kris, 66, and Corey began dating in 2014- just one year after her divorce from Caitlyn Jenner was finalized.

“Love you Deep bab. Cheers To the best mother & more decades of Love and good health with u.”

Corey showed his love for Khloe following news that her baby daddy, Tristan Thompson, has gotten another woman pregnant.

DailyMail was first to report that personal trainer Maralee Nichols has sued Tristan, 30, for child support.

Maralee, who is expected to give birth on December 3, allegedly conceived the baby on the NBA star’s 30th birthday.

At the time, Tristan claimed to be “still dating” Khloe.

In the child support filing, the Sacramento Kings player admitted to having sex with his personal trainer several times at a Houston hotel after they attended his birthday party together.

Maralee allegedly “drove him to the event in her Maserati sportscar” before they headed back to his hotel where she “had a special birthday surprise” for the famous athlete.

Tristan claimed he knew the encounter would lead to sex, though he asserted that was the only time they were “intimate.”

However, Maralee’s lawyers claimed their affair began about “five months” prior to the birthday tryst.

It was recently revealed that Tristan offered to pay Maralee $75K to keep quiet about her pregnancy.

Fans accused Corey of being ‘creepy’[/caption] He has been dating Khloe’s mom since 2014[/caption] Khloe’s baby daddy recently got a third woman pregnant[/caption]
Source: thesun.co.uk