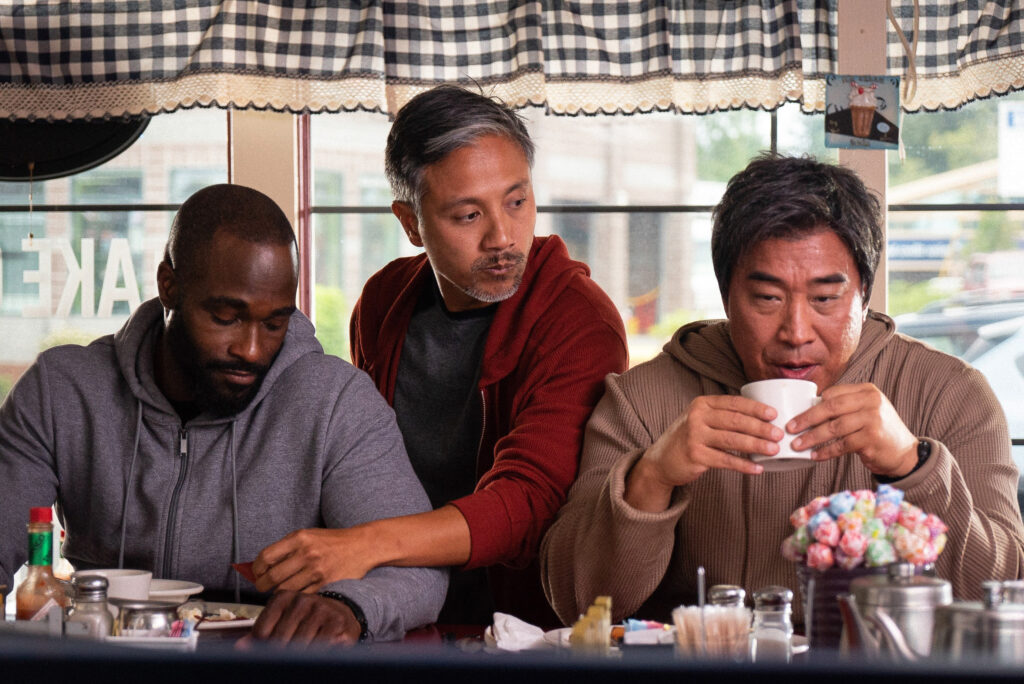 “The Paper Tigers” is a likable example of grit and dogged determination, both onscreen and behind-the-scenes. Writer-director Tran Quoc Bao said he turned to Kickstarter to help finance his first feature film rather than give in to Hollywood’s suggestions that he cast white actors to play the lead roles he wrote as Asian Americans.

It took nearly a decade, but now Tran’s kung fu comedy/drama is out Friday, May 7, and in the way he envisioned it. Any similarities to “Cobra Kai” are merely superficial.

Centered around three over-the-hill fortysomethings reuniting to solve the murder of the beloved master who trained them as teens, this film may look like another old guy action picture, but it has a Dad Fu vibe that’s uniquely its own.

Alain Uy (last seen in Hulu’s aborted supernatural superhero series “Helstrom”) is the primary focus of the trio as Danny, now a gray-haired, divorced dad with a demanding, all-hours job in insurance. He’s joined by Hing (Ron Yuan, “Mulan’s” Sgt. Qiang), has put on some pounds since hurting his back in a construction accident 10 years earlier, and Mykel Shannon Jenkins’ (“The Bold and the Beautiful”) Jim now coaches MMA fighters, which isn’t exactly in line with the late Sifu Cheung’s (Roger Yuan) strict code, to make up the Three Tigers.

The Seattle-set film ambles along at an agreeable pace with a definite down-to-earth attitude. This isn’t wirework martial arts moviemaking, but the fights are well shot and staged (director of photography Shaun Mayor and action director Ken Quitugua attended San Francisco’s Academy of Art together), with lots of humor and even more evident pain. The reconstituted Tigers generally get whupped, whether they’re taking on a triad of younger punks or their old, preening nemesis Carter (Matthew Page), a white guy who’s been teaching kung fu throughout the intervening years and now considers himself Chinese.

I won’t spoil details about the final confrontation, but let’s say that by the time it comes around, you’ll be pretty convinced that the Tigers aren’t ready for it.

The specifics of Danny’s middle-aged angst are unremarkable but convincing; he’s an everyman who could have been something … flashier. He has learned from life, though, and that’s worked-in best when Danny deals with his thoughtful, pre-teen son Ed’s (Joziah Lagonoy) questions about honesty and bullying. Hing and Jim’s stories aren’t nearly as fleshed-out, and Jae Suh Park does what she can to infuse more than anger into the underwritten role of Danny’s ex, Caryn.

Despite such shortcomings, Tran maintains a good balance of comedy, character drama, suspense and action throughout “Paper Tigers.” Undergirding it all is a light but ever present tension between living up to the philosophy the men were taught as teenagers and making their way through the realities and compromises of American adulthood. Tran’s not preachy about that, but the filmmaker’s killer move is showing how his heroes’ souls can be as fragile as their aging bones, yet resilient when the situation demands.