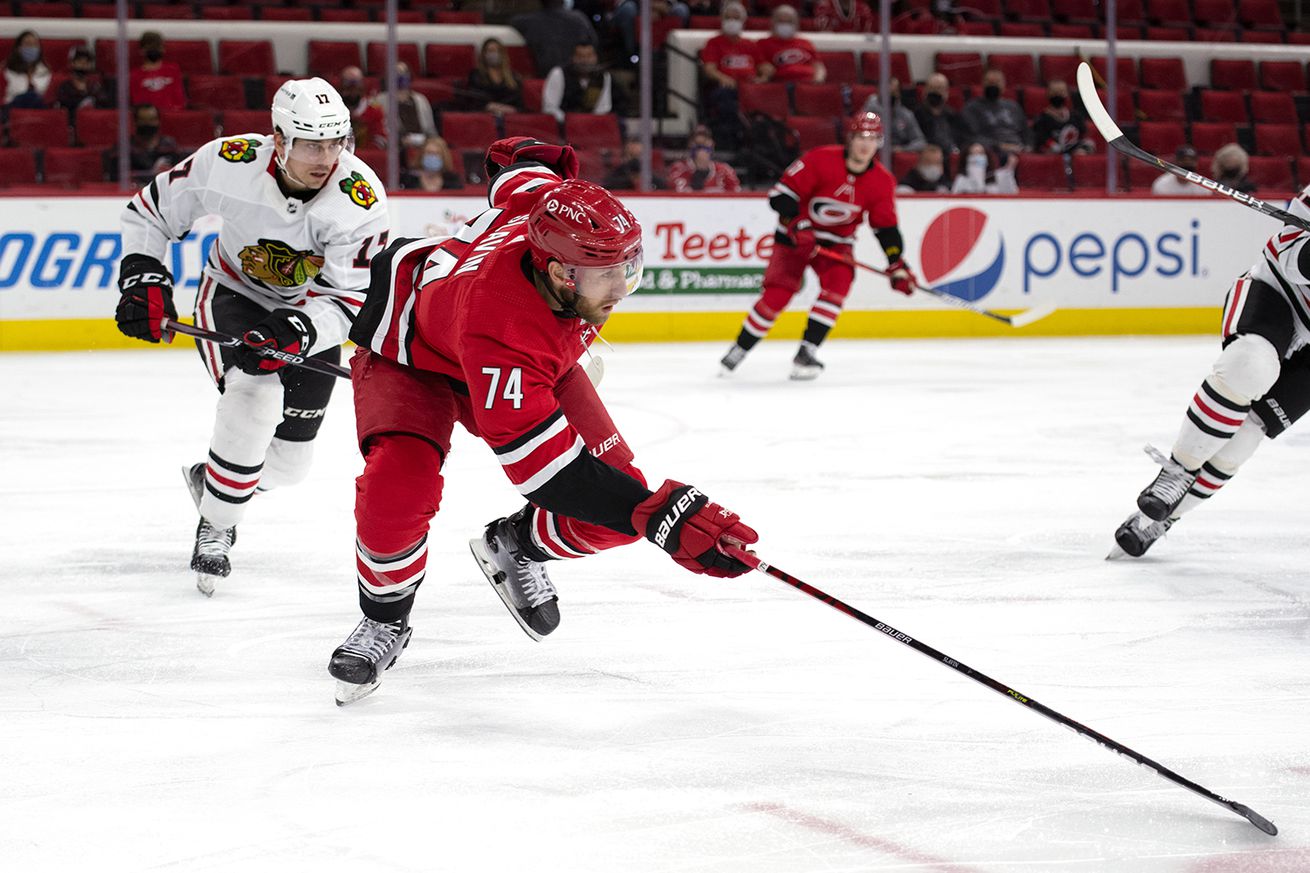 They said it: Brind’Amour, Slavin, Teravainen, Svechnikov on win over Chicago

The Hurricanes overcame a slow start and 2-0 deficit with a number of strong performances across the board, including three-point nights for Teuvo Teravainen and Andrei Svechnikov and two assists for Jaccob Slavin.

Slavin, Teravainen, Svechnikov and Rod Brind’Amour spoke to the media after the win, here’s a full breakdown of everything they had to say:

On Teuvo Teravainen playing well in his return: It certainly helps. He makes players around him better, clearly. He has since day one of being here. I think that was really evident tonight, obviously. He’s a big part of what we’ve got to do, and he was great tonight.

On the importance of clinching home-ice advantage: You never know if it’s going to be an advantage until it’s an advantage. Meaning you need that extra game or whatever and you look back that it was great that we finished that way to get home-ice advantage. I think more importantly is going to be for us to finish strong here, just to not have the bad habits that we just don’t to pick up anything. We don’t want to derail a really good season we’ve had to date by finishing iffy. It wasn’t a great game tonight. We got by with a lot of good efforts. The talent that we have on the team kind of won us the game. But it wasn’t pretty.

On Teravainen’s shooting: The ones that he’s shot, there was no choice. He had a couple on the power play. I’d like to see him pull the trigger on the 5-on-3. He’s always looking to make that play. He’s so unselfish, and we love him for that. But he’s got a good shot. He’s a complete player.

On Patrick Kane and the Hurricanes scoring six times with him on the ice: I don’t know if he had anything to do with those. He’s as elite as they come. I like to watch him play but not against us. He’s always making something happen. You talk about Teravainen making the players around him better, that guy’s probably the best at it maybe in the league. He’s got a tough matchup when we can get our top guys against him. That’s the best we can do. And he still gets on the score sheet, so he’s a tough guy to control.

On how he gets the team to play the way he wants them to play after the first period: It was not pretty. How do you get them to play the way you want them to play? That’s the million-dollar question. You feel like you’re cracking the whip constantly, and you’ve got to be careful about that too. So it’s just we weren’t great and we got stung. I give the guys credit. It’s never usually from a lack of effort. Sometimes we almost try to do too much and get away from the game that we need to play. We were able to get back in the second and like I said, the talent was really what took over. It took some high-end plays to win us this game.

On Petr Mrazek: You give them breakaways and two-on-ones and stuff to start, that’s not good for us. I thought he made some good saves after that and we’ve got to get him a couple more games here, obviously, to make sure we can get him up to speed. He hasn’t played enough. So I’m sure there’s some rust there, but he was fine.

On Andrei Svechnikov: He wants to learn, and he’s such a good kid. I think what’s helped is [Teravainen] coming back clearly makes that whole line go. When he picks it up a little bit, now that confidence, you can see, he’s feeling it again. So hopefully that continues. Because obviously when he’s on, he’s pretty unstoppable.

On his lacrosse goal attempt: I had the chance there, but I felt like the ice was pretty bad there. I kind of picked it up, but there was D on the side so it was tough to score that one.

On Morgan Geekie’s lacrosse goal attempt, which led to an assist: Yeah, I saw it. It was great, actually. Sometimes it works. You fake it, and it was a nice pass by him to an empty net. That’s great for him.

On him calling Tripp Tracy “grandfather” and when that started: This summer. When we were here, me and my brother. My brother called him grandfather once, and that’s how it became. We started calling him our grandfather this summer.

On clinching home-ice advantage for the first round and the importance of that: It’s always important when you start at home. Your fans are there, and you know the ice. It’s always fun to play at home and very important, for sure.

On why they started so bad and what turned it around: I don’t know, to be honest. I felt like we were a little bit off, a little bit slow. After we came off in the intermission [Brind’Amour] said to us a couple words, and we came out ready. That’s how it works sometimes. It’s a good thing we won that game.

On what Brind’Amour said: That’s going to stay in the locker room, so it’s our secret.

On the mentality not changing regardless of the score: I feel like we always just work and work. Whatever the score is on the board, we just try to get to our game. Whenever we do that, we usually play pretty good and get some goals. Even when I wasn’t playing and we had games when we were down a couple goals, it feels like we just always have a chance to come back.

On why they started so slow and on what turned it around: We weren’t our best in the first. They scored a shorthanded goal, that’s always not good. We got better. We got into our game. It’s the small, simple things that make the game better for us.

On if he feels like he’s back to 100 percent with the timing: Yeah, I don’t know if I’m ever 100 percent. I always want to be better. But I feel pretty good. Of course we have a couple more games for sure, and these are good games for me to get in my game and get my feel for the puck. It’s been good, I think.

On clinching home-ice advantage for the first round of the playoffs: Yeah, it’s a huge step. Anytime you can have home-ice advantage there’s little things that go into that that make the game management side of it a lot easier. And obviously from the fan perspective that’s awesome as well to get the Caniacs involved. Hopefully we can just make a good run at it.

On the feeling after the first period: We do have a confident group. We know what we’re capable of in there when we play the right way and to our strengths. We knew we had to get to our game. We knew we weren’t going to win the game in the second period, but we just had to battle our way back into it. That’s what happened. In the third period we got to it a little bit more, and the skill kind of took over. You saw some of those nice goals that the Aho line had. That’s huge for us.

On the 12-game point streak and on if they are in a playoff mentality already: Yeah, we want to make sure that we are playing the right way every night, obviously. But making sure that we have that playoff mode engaged before playoffs even hit and we’re playing to our strengths and what makes us successful as a team and why we’ve had the year that we have had. We don’t want to take any steps back these last couple games. We want to keep pushing forward and keep getting better whenever playoffs do start.

On how Brind’Amour handles things in the locker room after a slow start: It can be different any night. He expects greatness from us because he knows that we have a great group of players in there. He comes in, and sometimes it’s not even words that have to be said. The guys in our locker room, our leadership group, we have a high standard for ourselves and the goals that we set. We know that we had better, and [Brind’Amour] is just kind of giving you a little kick in the butt. We know we have what it takes in there.

On why Teravainen has been shooting more since returning: He was a mad Finn. No, I don’t know. He’s a great player. He can put the puck in the net, obviously. All the guys, we just try to get that guy to smile. When he’s playing good hockey, that’s when that’s happening. When he’s scoring goals we give him a hard time about trying to hold back the smile.

On how hard it is to defend against a top line like the Aho line: All across the board for their line they’re so skilled and they’re fast. That makes it even harder. They’re not the biggest, not the most physical line. But their hockey sense is through the roof, and obviously their skill is with the best of them. You’ve got to try your best to take away their time and space and not let them come at you with speed. But like I said, with their hockey sense it’s a tough task.

They said it: Brind’Amour, Slavin, Teravainen, Svechnikov on win over Chicago