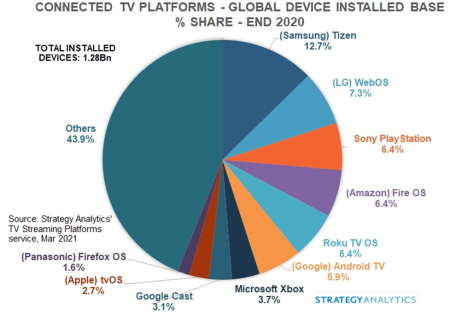 There has been a rash of TV app feature faults, freezes, and failures among top streaming services in the second half of this year. Here are three of the most visible incidents and three reasons why the TV app bugs occurred.

In the run-up to Thanksgiving, YouTube TV users streaming on multiple different connected TV devices reported that the app was freezing. While stream freezes are common, app freezes are not. To resolve the issue, users needed to exit the app and restart it from the top menu. A common procedure to resolve an issue such as this is to delete and reinstall the app. However, users of the most popular TV platform in the US – Roku – can’t follow the procedure. The app has been removed from the channel store due to a longstanding dispute between Roku and YouTube.

On October 15th, Roku began rolling out a major OS upgrade – 10.5 – to its devices. Unfortunately, some older Roku Ultras and Roku TVs users began to experience problems playing video in popular apps like HBO Max and Disney Plus. Roku suggests users of player models 4660, 4661, 4662, and 4670 and TVs with a model number starting with 7 manually check for a new software version and update to it if available.

In the summer, a raft of problems surfaced for users of the HBO Max app. Some Apple TV users had trouble with fast-forward and rewind (so-called trick-play,) and others were forced to reenter their closed captioning, subtitle, and audio description settings each time they entered the app. Some Roku users reported stream freezes and even box crashes while using their Roku device.

As a user of a Roku Ultra model 4660, I can attest to seeing all three of the issues listed above. Dealing with them has brought to mind something a senior cable TV executive told me ten years ago as I extolled the virtues of connected TV and apps. He laid his hand on my shoulder and, with pity in his voice, said:

“Colin, people will never accept having to reboot their TV.”

So, what has gone wrong? Why do we now have to accept rebooting our TVs? Here are three reasons things go wrong with app-delivered television.

Although top Internet TV services run on budgets measured in billions, they still can’t avoid introducing app bugs. However, when you consider the challenge in delivering an app on connected TVs, it is surprising we don’t see more problems! To reach at least half of connected TV users, a service provider must deliver ten different apps for each of the ten top TV OSs. With huge differences between the TV OSs, it is no surprise that HBO Max problems were radically different between Apple TV and Roku.

Device and TV OS providers continue to innovate and improve their products. Over time, the differences between the newest and oldest versions of the product increase. Ensuring that apps written for a previous version of the TV OS or device still work correctly means a massive amount of compatibility checks (called regression testing) need to be made each time a new version is released. Sometimes, as in the Roku OS 10.5 update above, things get missed in the regression tests.

The older an app gets, the more complex its code becomes. Features get added that were never imagined when the service first launched. Relentless feature upgrades and bug fixes made on tight schedules lead to increased complexity. After a while, it gets hard to make a change without causing a problem somewhere else in the app.

Oddly, complexity seems to have been at the root of some of HBO Max’s problems. Though the service is only 18 months old, the app is based on the 11-year-old HBO Go app. That app has been rock-solid over its lifetime, but HBO Max asks it to serve a global audience with far more content than it was designed to handle. The company is even asking it to deliver ads, something the original app designers would never have believed possible. Little wonder that the company has embarked on a massive app rewrite.

That said, as long as the CTV landscape remains as fragmented as it is today, I’m afraid we all may be called upon to reboot our TV occasionally.

[1] Maz was purchased by video platform Zype earlier this year.

[2] You.i TV was purchased by WarnerMedia and is being used for the HBO Max app rewrite.

At nScreenMedia, we never accept payment to publish an opinion piece. We do accept general sponsorship of the site, though sponsors exert no editorial influence over our conclusions and opinions. That said, we are grateful for their patronage. Please join them. For other important disclaimers, visit https://nscreenmedia.com/about/disclaimer/.