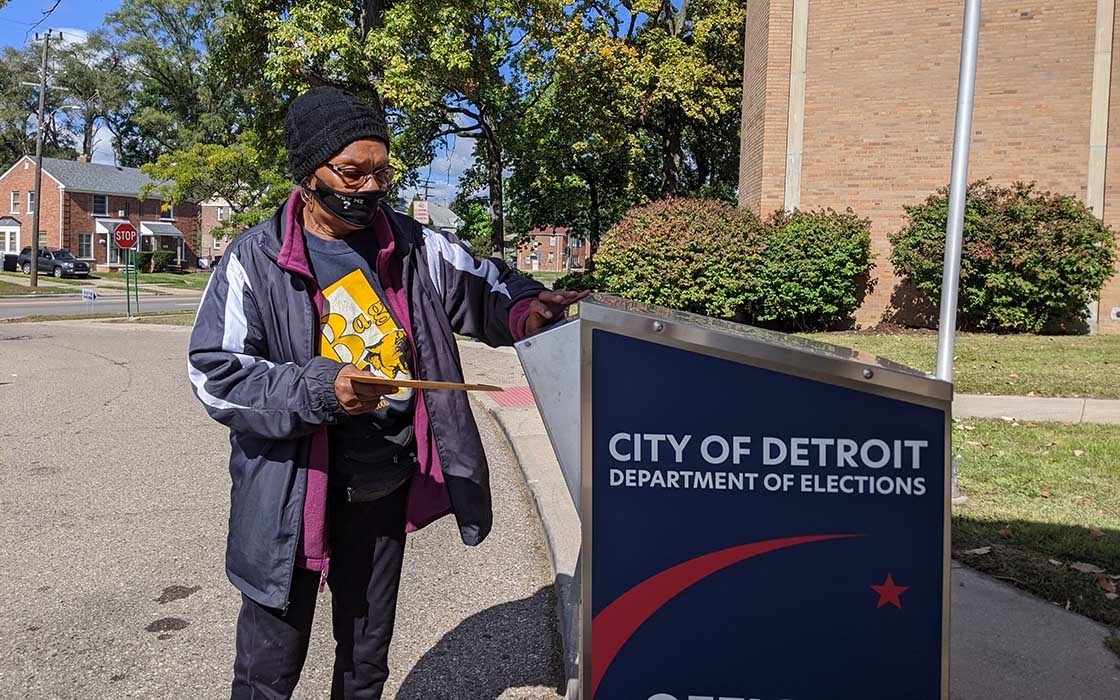 Why Detroiters should worry about the Senate elections package

Over 65,000 Detroit voters cast their ballot via a drop box in the 2020 general election.

Earlier this month, Republicans introduced a package of 39 bills that would restrict voting in Michigan. Senate Republicans say the changes will make Michigan’s elections more secure and accurate, despite the fact that there is no evidence of fraud or wrongdoing in the state’s 2020 election. In fact, Detroit saw its biggest turnout in more than 10 years and options like drop boxes eased fears of in-person voting and mail delays amid a pandemic.

The package, which is being reviewed by a state Senate committee, has been heavily criticized across the state and country as an attempt to discourage and disenfranchise already marginalized voters. Though it’s unlikely the full package will move forward, some of the bills are likely to be recrafted, and there’s little that Michiganders can do to stop their passage. Experts say Detroit, the state’s largest city, will be expected to support and count the ballots of hundreds of thousands of voters with fewer dollars and in less time than in previous elections.

“They want to have the legal ability, in the future, to certify and exclude the Black vote,” Wayne County Commissioner Jonathan Kinloch said about the proposed changes.

Kinloch, who also serves on the Wayne County Board of Canvassers, said the proposed restrictions are a follow-up to Republican-led efforts to prevent the certification of votes in the 2020 general election. Kinloch said the Wayne County canvassing board tried to purposely disenfranchise Black and Brown Michiganders from voting in 2020. At the time, commissioners suggested certifying Wayne County votes while excluding Detroiters, who overwhelmingly voted for President Joe Biden.

Under the proposed package, the number of members on a canvassing board who have the power to certify the votes of an election would increase.

Kinloch said the measures Michigan Republicans are taking are similar to new voting laws in states like Georgia, where it’s been made more difficult to vote. Kinloch said Michigan’s proposed election package will “legalize cheating,” ironically, after numerous, unscrupulous lawsuits from Republicans in 2020 falsely claimed fraud in Detroit.

“None of the fraudulent issues that people were claiming existed,” he said. “2020 was something of a nightmare, created by individuals going into the court and basically lying.”

Gov. Gretchen Whitmer is expected to veto the final bill package. However, Republicans hold the majority in both the state House and Senate. This power allows the legislature to overrule a veto through an initiative process with a small percentage of voter signatures. While likely to happen, voters would have to wait until the next election cycle to undo the legislation.

How proposed election changes could affect Detroit voters in 2022

Chris Thomas, former state elections director who worked as an adviser to the most recent Detroit election, said the proposed changes create barriers for people who want to vote but may not have a lot of time to do so.

Amid a global pandemic, Detroit saw an increase in voter participation by about 1 percent from an already high voter turnout rate in the 2016 election. Though still lower than the state’s voter turnout, over 250,000 Detroiters voted in the 2020 general election — 174,000 of which voted  absentee.

“I don’t know how many times you can get people to make this trip,” he said about limiting drop box hours and giving provisional ballots to absentee voters.

Michiganders approved expanded access to voting in 2018 by supporting no-reason absentee voting and automatically registering adult residents to vote upon receiving or renewing a license. The law also allows residents to register and vote on the same day. The expanded access to voting was intended to support residents who could not leave work to vote, did not have reliable transportation to the polls, and residents who had never voted before, among other issues.

Kinloch said the proposed changes would be an “intrusion of access to the ballot” by creating “additional layers of inconvenience.”

“Republicans (want to) delay an individual from turning in their ballot, which further reinforces the distrust and lack of confidence,” he said.

With help from the Secretary of State’s Office and $7.2 million in third-party funding, Detroit could afford to hire more poll workers, order high-speed tabulators to accurately count ballots, and increase the number of drop boxes to 39 for voters who wanted to vote absentee. City Clerk Janice Winfrey told BridgeDetroit last fall that the $10.5 million city elections budget did not cover the cost of the needs to support Detroit elections. Therefore, grant funding was needed to supplement the budget.

“An audit of Detroit’s absentee ballot counting board, which has been attacked repeatedly with lies, baseless conspiracy theories and the misleading claims of people lacking the knowledge of election procedure, found that while clerical errors had occurred, election workers supervised by the clerk’s office properly counted 174,000 valid ballots that corresponded to signed envelopes that were submitted by registered voters and reviewed by the clerk’s office,” Michigan’s Secretary of State’s Office reported in a March 2021 statement.

Under the proposed bill package, elected officials would not be allowed to send absentee ballots to voters by mail, local election departments would not be able to accept third-party funding, and no pre-paid return postage would be provided for absentee ballots. The Republican-sponsored package could also block drop boxes at the county level and would prevent anyone from submitting a ballot via drop box by 5 p.m. the day before Election Day, even though polls don’t close until 8 p.m.

Overall, Thomas called the package a “disservice to voters.”

Millions spent to run a secure and accurate election

Thomas credited third-party funding for an adequate and timely vote count in larger districts like Detroit. Thomas said voters should question why the Legislature would support a bill banning third-party funding when the state has the power to appropriate dollars to local entities to run adequate elections.

Elections are typically funded through federal dollars allocated to states through Help America Vote Act funds. Legislatures and secretary of state offices, depending on the type of election, send those funds to local municipalities.

Chris Hackbarth, director of state and federal affairs at the Michigan Municipal League, said that though the organization supports the package’s proposal to process ballots earlier, other pieces of the proposed package, like not allowing communities to use their own funds to send pre-paid postage to return a ballot, don’t make sense.

“That’s just silly,” he said. “Without knowing all of the pieces that may or may not get passed and approved by the governor, certainly anything that requires extra work from the local unit, there is a requirement from the Legislature to fund that.”

Hackbarth said MML would look closely to see whether and how new mandates on local governments would increase costs and how those mandates may intersect with the Legislature.

Hundreds of precincts for hundreds of thousands of voters

In addition to the aforementioned changes, the package would also require all votes be tabulated and submitted by noon the day after the election. Thomas said without money for high-speed tabulators, Detroit would not have counted ballots from all 503 precincts and absentee ballots in a timely fashion.

Thomas told BridgeDetroit that speeding up the vote count process while expecting an accurate count would be “very unrealistic.”

“I don’t know what more they really can do,” he said.

It’s unclear which parts of the proposal will become state policy while under committee review. However, Thomas said so far, the legislation has done nothing but  “create chaos.”

Why Detroiters should worry about the Senate elections package